Michael Chizmar's Yuengling Reefer car. Great job Mike!
Mike Green ordered some on-file decal sets  of 2 different types of Delaware and Hudson Glass Recycling hoppers. He did a great job of painting and then applying the decals he bought.

Bill Wade a repeat customer who also does a great jobg in Custom Painting service as well, Did a 40 SD boxcar in New Orleans Public Belt. A very good looking job as usual Bill!

Cameron Smith ordered a set of PRR MOW Car -tool car decals and decorated it for brown turn of the century style. Here is his rendition. A great job Cam. Thanks for the pic.

Jeffrey Koch asked if I had the Duluth, Missabbee, and Iron Range Locomotive set in HO Scale. I only had it listed in the G-Scale sets. So I added the set to the HO Catalog as well. AS you can see, Jeffrey said he was a bit rusty on applying the decals. Well it looks like he never stopped decaling equipment as is evident in his 4-8-8-4 Steam locomotive and tender shows. Great job there Jeffrey!

Carl Rettig wanted to replace the lettering on some American Flyer trains. He sent me close up pictures of the lettering and details of dimensions and spacing of lettering and we came up with these S-Scale sets to replace his lettering.
Ben Maggi emailed me wanting to model a specific BN Flatcat he saw in a picture. Here is the results. The decals are actually slanted like they are on the real car. Ben also added what looks like a custom load of cold rolled steel plate. Another nice job Ben.

Dan Knoch purchased one of my G-Cal Decal sets from my library of 100's of large scale decal sets. He had a Nickel Plate Road RS3 Switcher and wanted the wood caboose set for NKP as well. You Can see the nicely painted, decaled and detailed caboose he custom made. This decal set was originally released a week before the EAST COAST LARGE SCALE TRAIN show about 15 years ago and was a work shop on decal installation that I gave at that show and we decaled a Bachman wood type caboose just like Dan's masterpiece you see below
Ryan Crawford was wanting to build a Chicago & Illinois Midland Diesel locomotive so we fixed him up with the decal set. Ryan wrote:
This is an Atlas SD24 chassis, frame, cab and nose mated to a resin casting of a proper SD18 long hood. Of course, the numbers were your handy work and they look perfect. One thing I did do is when I applied the numbers I did them in two layers to make it appear more opaque. They are perfect looking and really make the model prototypical.

Cameron Smith also had decals made for his flat cars in PRR as well. Here is what he told me about the flats:

I also got around to lettering a couple Funaro & Camerlengo PRR class FM Flat Cars circa 1906, using the decals you made for me.
CAMERON SMITH IS MODELING THE PENNSYLVANIA RR IN HO SCALE AND WANTED SOMETHING THAT NO ONE ELSE HAD PARTICULAR TO HIS ERA THAT HE'S MODELING. CAMERON GOT A HOLD OF THESE STEAM ARE 3D PRINTED GB WOOD GONDOLAS. CAMERON PURCHASED THESE DECALS FROM ME ABOUT 3 YEARS AGO AND WITH THE STAY AT HOME ORDERS HE GOT AROUND TO PAINTING THESE CUSTOM PRODUCED GONS AND APPLYING THE 3 YEAR OLD DECAL. THIS SHOWS YOU THAT THE I PRODUCE WILL LAST FOR YEARS IF STORED IN THE SEALABLE BAGS YOU RECEIVE THEM IN AND STORED AT ROOM TEMPERATURE. NICE CUSTOM GONS THERE CAM!
Cameron added this info:
PRR class GB hopper-bottom gondolas, built from the Doug Forbes Shapeways body, with added details and decals to represent service during the first decade of the Twentieth Century.

THIS IS THE SECOND CENTRAL OF GEORGIA LOCOMOTIVE BILL WADE HAS CUSTOM PAINTED AND DECALED. BILL IS A GREAT CUSTOM PAINTER, DON'T YOU AGREE!

BILL WADE WANTED TO MODEL THE MKT DIESEL SHOWN BELOW. HE SENT ME SOME DIMENSIONS AND PICTURES OF THIS LOCOMOTIVE AND WITH HIS INPUT, THIS IS THE NEWLY RELEASED DECAL SET AVAILABLE. BILL HAS MANY CUSTOM PAINTED AND DECALED MODELS ON HIS RAILROAD. ITEMS THAT NO ONE ELSE HAS. NICE CUSTOM JOB THERE BILL!

Walt Walewski contacted me some time back about some Large Scale decals for an Aristo SD-45 he had.

He sent me dimensions from his loco and we designed a set together with his input, you see the beauty yet simple elegance of his PRR SD-45 and his nicely groomed mainline.

Lenard Tracey contacted me about a G-Cal Decal set for a G Scale GP locomotive he had. Lenard started with a Lionel GP 20 which was in The Milwaukee Road scheme. He stripped and repainted it into: Baltimore and Ohio Graphics. Nice Job Lenard!!

Terry Kolenc emailed me and asked if I could make him HO scale decals for Wisconsin Electric utility which has Thrall hopper cars. He sent me detailed measurements from his MDC cars and several pictures of the real hopper cars. It took us some time but as you
see, the results were worth the wait. He also noted that the Wisconsin outline required that single decal to be cut into 7 individual pieces to install properly. Give him a hand for his work which he said averaged 3 hours per car to install these decals. A lot of work but he now has the cars he wanted. Nice job Terry!
Above: David Pfeiffer emailed me about an O scale Decal set for a Lehigh and Hudson River North east type caboose. I had the set in HO scale and he shot me some dimensions of his O-Scale caboose. And as you see, A fine job he did for sure. If you don't see what you want, just ask. I can most likely make your decal sets that you only dream of right now. Just ask.

Jeff Koza wanted a particular switcher for his model R.R. SANITARY DISTRICT OF CHICAGO. He sent me links to the real switcher locomotive's picture. So I made him this set of decals for his road. Paint decals applied by Bob Kleinman.

John Spange ordered our "Buffalo Brands" HO Whiskey truck trailer decal sets and did up a Sam Adams Lager which is a 1 piece decal which no painting is required as the sides and ends are full decals. He also did up 2 Chrome sided trailers in Johnnie Walker and Louis the 13Th whiskey trailers as well. The chrome trailer sets look awesome. Great job John!

Bill Wade's been at it AGAIN folks. He had an Aristo stock car and made a personalized car for his fleet. He emailed me a donkey to which he instructed me to add some simple text to and Walah. A Central of Georgia stock car with attitude. Great job Bill.
Bill Wade wanted a copy of an HO car for his LGB cylinder hopper.So he gave me some size info and there you are!

Carl Rettig ordered a set of O Scale "Mr. Gilberts Private Car" Here is Carl's nearly complete car with out end railings, but with the additional lettering shown above which he alerted me to.
Wilson Martin built this tanker for his road and decorated it General American Tank Car. Decals from MODERN RAILS G-CAL DECALS LINE. Good thinking Will putting together a home built tanker. And a great custom paint and decaling job. I especially like the caustic soda dripping stains. Scroll down a bit and see Wilson's Chrome SF Units he made with my decals.
Ricky,
This is the tanker that received your decals. 2” PVC pipe and a Kirkville Locomotive Works kit. The dome assembly came from Ozark Miniatures. I’ll add “molten sulfur” letters and add weathering then I’ll call it finished!
Bill Herbert wanted to make a old style MDC wood steam era boxcar. We found a decent picture of the MDC car he wanted to model. I drew the decal set right over the top of the lettering that was on the pictured boxcar. We see his newly modeled car below. Bill also wrote me: Hi Ricky,  The car came out great!!  Can’t thank you enough for doing this one.  Photo attached.  I can send other views if you want me to. I was a little nervous about changing things on the car because of your comments but I really had no problems at all.  I did weather it lightly.
Bill
Awesome job on the painting and decal placement on your model Bill. I am pleased that you chose Modern Rails Decals for your project.
WILSON MARTIN CONTACTED ME ABOUT MAKING DECALS FOR HIS SANTA FE CHROME UNITS. HE SENT ME PICTURES AND SIZES OF FONTS ETC NEEDED FOR HIS PROJECT.
WILSON ADDED THIS: I shot them myself. I used Floquil paint I had bought years ago, through a Paasche H model single action  airbrush. SP Scarlet, ATSF Yellow and Engine Black, thinned with Diosol. Then clear coated with a gloss acrylic spray prior to decals which were set with Microscale Microset and Microsol, then Testors dull cote, feathered on lightly, as per your instructions. And I love the results!
A while ago Brien Wood contacted me about a single decal for his coal tender and water capacity for a decal.
Ricky,
I received the decals on Monday.  Really appreciate your quick turn around!  Attached is a quick picture showing how the water level decal is used on my model.  If you want to use it on your website.
Thanks again,
Brien
Larry Mills worked with me to redecorate his CSX Diesel. And it turned out AWESOME!!
Here are a couple of photos of my repainted and decaled CSX that you made the decals for. I finally found the pictures in my train file foulder. Ron Nagey was very helpful in helping me to get this engine complete and back on the rails. It looks great! Thank you for working with me on the decals.

Ricky,
Thought I would send a couple shots of the first unit done...a Weaver U25B...custom made firecracker antenna, dropsteps, and sunshade, along with an Atlas bell, and precision horn...Locomotive was painted Floquil reefer yellow, and Scalecoat CP rail red 80% to 20% white... with out you this locomotive would not be  possible...
Shawn Calay

Brandon Presley Contacted me about 2 Southern Crescent passenger cars he wanted to change the names on. Working with Brandon, him letting me know the sizes he wanted for his cars names. We got the color right using Elephant's rocket Sunflower with a 2 spot color pass. He applied the decals and they look amazing. good job Brandon! The road names you see were drawn by Modern Rails Decals 2019.


I HAVE THE NEWLY RELEASED ALPS TRUE COLORS AVAILABLE:

SUNFLOWER YELLOW-A VERY DEEP YELLOW WHICH CHANGES THE GAME PLAN ON ANY TRAIN, LOCOMOTIVE HAVING YELLOW GRAPHICS, CHEVRON STRIPES. THESE ARE PREMIUM COLOERS AND I MUST CHARGE ACCORDINGLY AT $15.00 PER ORDER FOR MOST SCALES. HO WILL BE SLIGHTLY LESS$$.

ED JOHNSON'S 3 AND 4 BAY MAKE A WISH CYLINDER HOPPERS. A DONATION HAS BEEN MADE IN ED'S NAME.

The cylinder hopper below was custom painted and decaled by John Spange. Nice work don't you think! 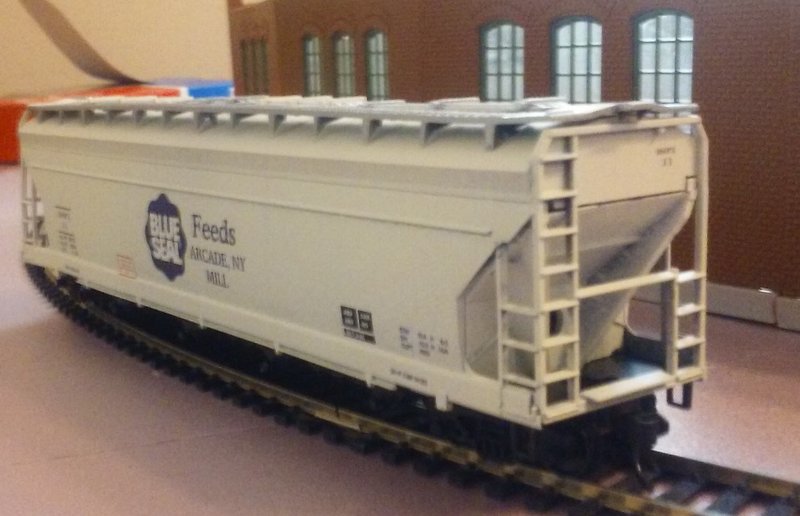 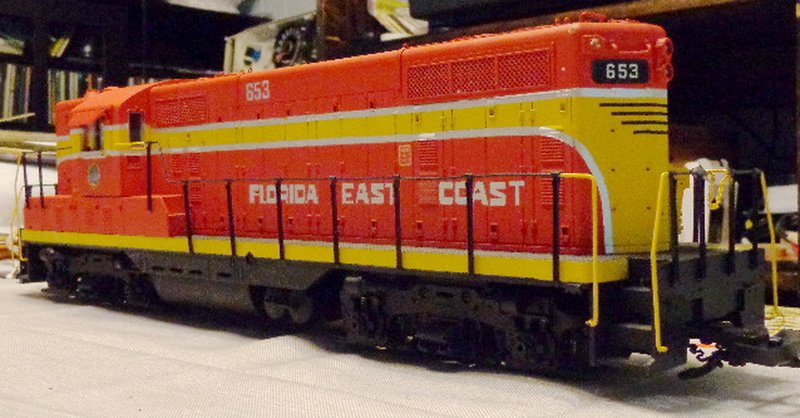 This page High Lights What My Customers Have Made Using Modern Rails Decals. 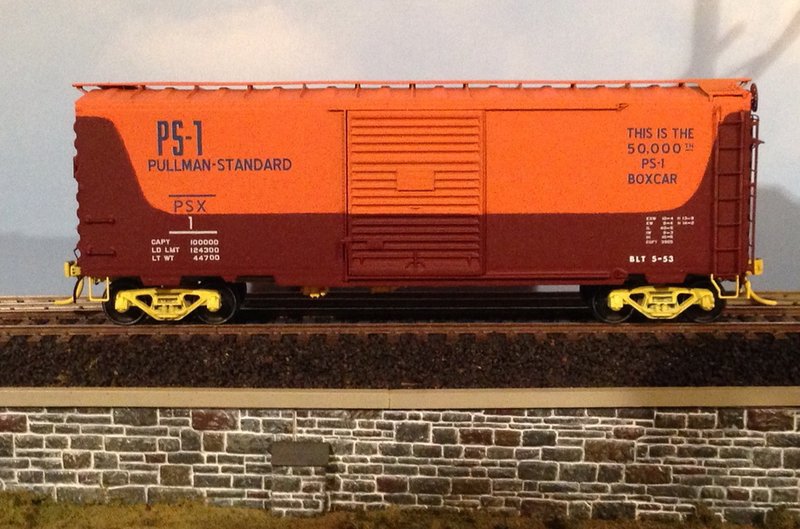 Here are a couple of photos of my repainted and decaled CSX that you made the decals for. I finally found the ECALS. SEE BELOW. 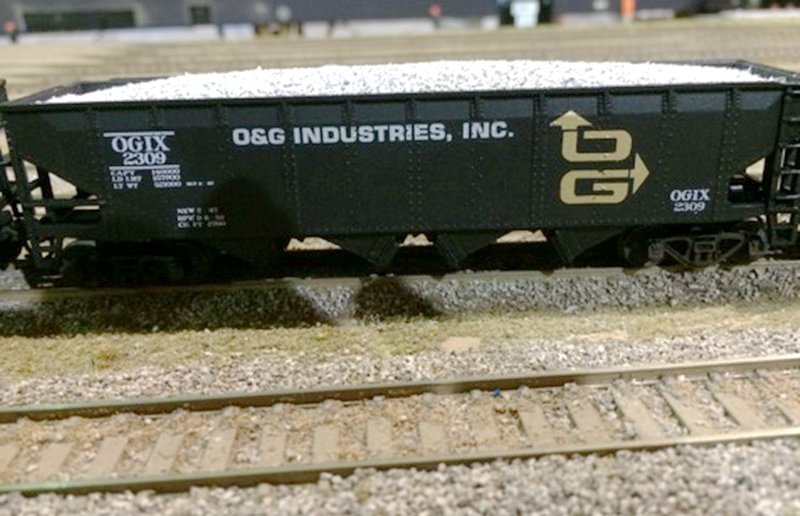